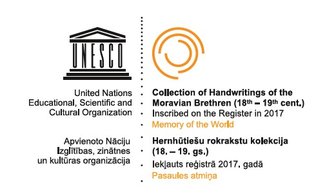 COLLECTION OF HANDWRITINGS OF THE MORAVIAN BRETHREN (18TH – 19TH CENTURY)

The collection of handwritings of the Moravian Brethren includes unique texts in Latvian created between 1758 and 1892 in the Vidzeme region. The Collection consists of 425 documents in Latvian handwritten by the Moravian Brethren of both Latvian and German origin – songbooks, life stories, statutes, diaries, missions, religious articles, devotional literature and Christian folklore. These documents testify not only to the formation of religious awakening and rebirth, but also to the formation of the Latvian national identity in 18th – 19th century.

Latvians searched for answers in the Moravian ideas not only to religious questions, but also saw it as a support in the struggle against the power of nobles. Therefore, in a very short period of time, Moravian Church turned into a peasant movement with a socio-political orientation. Moravian ideas were characterized by humanism, sensuality and sincerity, as opposed to the customary domineering of the church. If until now the peasants only obeyed the instructions given in the church, then Moravians introduced a completely democratic approach and directed the group and parish leaders among the peasants, forming peasant communities. Latvians and Estonians were finally given a self-expression opportunity and an opinion of equivalence.

The belief of the Moravians that each human has a unique value, regardless of their social affiliation, gave the first impulse for the Latvian peasants to focus on writing. Under the influence of this movement, the first spiritual workers emerged, which, in turn, initiated the development of national intelligence. The handwriting collection is not only indispensable for its content, but also provides a unique reading experience based on the self-critical view of clergy lives. It allows Latvians today to open the window to a nearly three hundred years old past, and understand the experiences and difficulties that our ancestors encountered, while also witnessing the first moments of the Awakening of the nation.