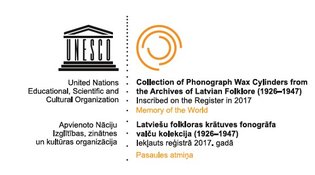 Archives of Latvian Folklore (AFL) shortly after its foundation in 1926, purposefully purchased two phonographs to record various folk songs. Over the next twenty years, on these phonograph wax cylinders – an authentic collection of audios was recorded. The tape recordings were later used to decipher folk song tones and melodies from the 3-minute recordings and accordingly posted. These are the oldest traditional music recordings from all over Latvia, accompanied by lyrics and transcriptions of lyrics.

The wax cylinders mainly include vocal music – both ancient folk songs and more recent schlagers. Currently, there are 180 wax cylinders with 1,068 folk melodies and their notations in the Archives of Latvian Folklore which are also available online in the digital archive: www.gramatas.lv

Although today we come across with a wide range of folk song cover versions, this collection gives a unique opportunity to hear the painting of music with the vocal performance of Latvian folk songs in the first half of 20th century. The uniqueness of the recordings also dwells in their diversity: among the thousands of melodies there is both dialectal and musical diversity, including anniversary songs, lullabies, household songs and many more. The recording technique is also unique – using a phonograph with wax cylinders or valves. Although it was a popular and widespread form of audio recording in the 1930s, nowadays it has become a relic in the context of historical recordings.